What can be better than three theme parks, with a fourth park in creation, based on blockbusters productions from Universal Studios, with each park having its own distinct personality? With the latest super heroes, villains, and mythical beasts to thrill and entertain along with nostalgia of the past, walking the streets of Universal’s different parks is a visual connection to many of the movies, both young and old have come to love. There is something here for kids of every age!

PLAN AHEAD – Tips for what families need to know for planning their vacation and what to do before stepping foot into the parks!

Here’s your park by park agenda for parents with younger children and older! Click here to access maps for Universal Orlando Theme Parks

Opening in 1990, this park is the original Florida Universal destination featuring experiences based on movies and TV shows such as Men in Black, Fast & Furious, The Simpsons, Despicable Me and of course, the ever-popular Harry Potter franchise. For younger children, head over to Despicable Me Minion Mayhem 3D ride as Margo, Edith and Agnes take you for an unintended tour of minion world behind the walls of their home while trying to give Gru an anniversary present. Afterwards, head over to Woody Woodpecker’s Kidzone and check out Animal Actors on Location, Woody Woodpecker’s Nuthouse Coaster and E.T. Adventure. Then let your kids run, jump and slide at Fievel’s Playland, a playground featuring oversized movie props while you take a few minutes to rest your feet.

With Universal Studios being focused on movies and TV shows, Islands of Adventure is where fantasy and the thrill rides are. For families with younger kids head to Seuss Landing to see stories of Dr. Seuss come to life. Hop on The Cat in the Hat ride to jump into the pages of this favorite book. Soar across Seuss Landing on The High in the Sky Seuss Trolley Train Ride. Make your way to The Wizarding World of Harry Potter – Hogsmeade via The Lost Continent but watch out for the Mystic Fountain which loves to play jokes and spray visitors. In Hogsmeade, young and old children will enjoy the Flight of the Hippogriff on this family-friendly coaster as well as everything Harry Potter. As with Universal Studios, you can grab the Hogwarts Express to travel the reverse course, experiencing a different ride, back to King’s Cross Station in Universal Studios. Or you can continue on to Jurassic Park. Check out Camp Jurassic where kids can explore, climb and discover in the prehistoric park. Fly above Camp Jurassic on Pteranodon Flyers. Then learn about the planet’s prehistoric past at the Jurassic Park Discovery Center. To cool off head to Toon Lagoon for your choice a three wildly wet experiences. You choose how wet you want to get! One warned, on Dudley Do-Right’s Ripsaw Falls your poncho doesn’t stop the water! Hit up Marvel’s Super Hero Island and swing through the streets with The Amazing Adventure of Spider-Man then look for Marvel Superheroes hanging out on the street outside the ride.

For school aged kids, head to Transformers: The 3D Ride for a sensory overloading, epic battle. Stick around to meet Optimus Prime, Bumblebee or the evil Megatron. Take a spin or three on Hollywoods Rip Ride Rocket coaster. As you strap, in select the tune you want to experience as you twist and loop for the minute and 39 seconds. Then, head to Race Through New York Starring Jimmy Fallon featuring major NYC attractions in 3D. Next, experience Fast & Furious – Supercharged for a high-octane ride. Don’t worry, you can rest at the next stop of Diagon Alley as you sip on a butter beer while your kids check out interactive wands at Ollivanders then attempt to make magic all around Harry Potter World. Don’t miss Harry Potter and the Escape from Gringotts thrill ride. From here you can choose to take the Immersive Hogwarts Express train over to Hogsmeade and Universal’s Island of Adventure. You will need a park-to-park admission ticket or season pass. Or, stay in the park and head to the World Expo section and grab the MEN IN BLACK Alien Attack experience to zap aliens and save the galaxy. A trip to Universal would not be complete without experiencing a little bit of Springfield, USA. Ride Kang & Kodos’ Twirl “n” Hurl and The Simpsons Ride. Finish off with The Bourne Stuntacular incredible and cutting edge stunt show and take in the Universal Superstar Parade. 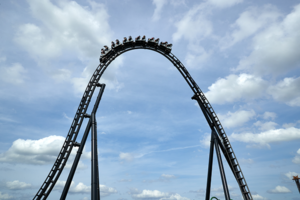 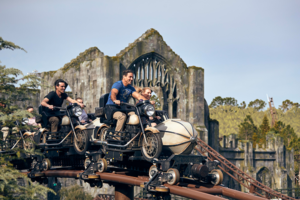 For older children, don’t miss the roller coasters in this park. They are the highlight! The Incredible Hulk high-speed roller coaster looks menacing from the ground but rides smooth yet pushes the boundaries of what you think your body can take. Then, there is Jurassic World VelociCoster, the newest addition to Universal’s offering which launched in 2021. With two intense launches and four inversions this ride will be either the longest or shortest two minutes of your life. Back in Potter World don’t miss Harry Potter and the Forbidden Journey and Hagrid’s Magical Creatures Motorbike Adventure, the longest coaster in Florida, 5,053 feet, with a record-breaking seven launches. Both Hagrid’s Magical Creatures Motorbike Adventure and Jurassic World VelociCoaster are consistently rated as Top 10 coasters in the US. A must for coaster fanatics. 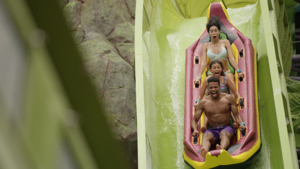 Discover this island paradise and you might not want to leave! The 200-foot-tall Krakatau volcano, is the centerpiece to this South Pacific themed, immersive waterpark. With 18 attractions, including a multi-directional wave pool, speeding body slides, aqua coaster, multi-rider raft rides and a winding river, Volcano Bay is a perfect way to relax and cool off from the hot Florida sun. For thrill seekers, start with Kala & Tai Nui Serpentine Body Slides then put your courage to the test with the Ko’okiri Body Plunge with a 70-degree drop door slide for a descent of 125 feet down the volcano.  This park was created for families with several family restrooms scattered around the park with private, roll-in showers. There is ample seating and umbrellas, multiple restrooms and life jacket locations. Also, guests can borrow the TapuTapu, a free wearable device which allows guests to queue virtually.

When planning your vacation, don’t forget to allow for some down time enjoy your hotel and the city of Orlando or explore the nearby Kennedy Space Center Visitors Complex at Cape Canaveral.

25 Tips for planning your trip to Universal Orlando

Insiders Guide to the Wizarding World of Harry Potter

6 Things I learned at Universal Orlando 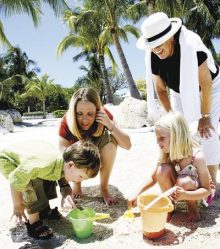 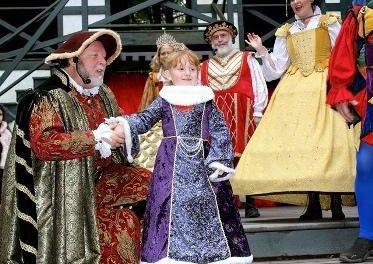