Bored by vampires? No, we don’t mean the Twilight-types, we’re talking Halloween costumes, and the tendency for us parents to seek out the safe standbys of black capes and plastic fangs. Certainly, there’s nothing wrong with classic witches and firefighters, or even a trip to the party supply store for a convenient costume in a bag. But if you’re feeling especially creative this Halloween season, fellow Massachusetts moms share these fun homemade costume ideas:

Created by Maria Bonilla of Waltham

Maria Bonilla’s son was undecided on what to be for Halloween last year. All he knew was that he wanted to be something gruesome and scary. Mom suggested a zombie, but he thought that idea was too simple. So they tweaked the traditional and invented the Pizza Man Zombie.

First, they ripped old jeans, a T-shirt and fleece, shredding the ends and adding holes where it looked right. They used a donated pizza box from Dominos and inside placed uncooked dough covered in plastic bugs to create a gruesome-looking pizza. “That was my favorite Halloween costume and the cheapest,” says Maria.

Created by Kim McLeod of Littleton

Two years ago, Kim McLeod’s daughter wanted to be a zombie for Halloween. She thought of all the old soccer T-shirts and shorts they had in the house and used them to create a Soccer Zombie. What else would lurk in suburbia?

First, McLeod cut the bottoms and sleeves of the shirt into strips and did the same for the shorts. They used an old pair of shin guard socks with holes in them for her legs. Her daughter wore messy pigtails, and they tucked dried leaves into her hair as well as the socks. A pair of skeleton gloves, an old medal and grey makeup completed the look.

Created by Danielle Povey of Beverly

Danielle Povey started with an adult-size white hooded sweatshirt. After turning the sweatshirt inside-out and placing it flat on a table, Danielle used a Sharpie marker to draw a scallop line on the bottom edge of each sleeve from the armpit to the wrist. Then, leaving it flat on the table, she pinned the sleeve front and back together, so she could easily sew on the scallop line. Next, she cut about a half-inch from this new scallop seam, to remove the original seam on the bottom of the sleeve. She turned the sweatshirt right-side out and, voila, she had the chicken body and wings! For the chicken’s comb, follow the same steps, but cut out a three-tiered shape.

For the beak, she put stiff interfacing (Fast2Fuse) between two layers of orange cotton fabric. (Felt would work, too.) She fused with an iron, then sewed the edges to secure, then sewed to the hood. She used brown buttons to make the eyes.

For an easier beak, sew two triangles out of orange fabric, right sides together, and leave the bottom open. Then slide in a piece of cardboard to hold the shape. Sew the beak to the hood, or just attach with a stapler.

Created by Kelly Marusich of Melrose

To make this costume for her preschooler, Kelly Marusich used a black plastic top hat on his head as the funnel of the train. She dressed him in blue sweatpants and a blue pullover sweatshirt. She cut two circles out of cardboard, about the size of his torso, and painted both grey. On the circle for his back, she wrote “Thomas” across the top with a large “1” under the name. She painted the front circle to look like the face of Thomas. Lastly, she took two strips of felt and duct-taped them to the insides of the cardboard to create shoulder straps.

By Tanya Trevisan of Duxbury

Tyler Trevisan, 3, loved french fries so much so that his parents nicknamed him “Ty-Ty the Fry Guy.” His costume was a logical choice – a red box that resembles the fries served at his favorite fast-food haunt.

She cut yellow felt into 12 large rectangular pieces and paired them off in twos for six fries. The pairs were sewn together (except for a small opening), inverted and filled with pillow stuffing. She cut two more pieces of yellow felt for a french fry that covered her son’s head and neck comfortably. She cut a hole in one of the pieces for his face, then sewed the two pieces together and inverted them. 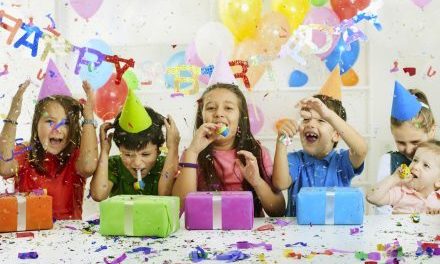 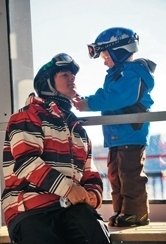 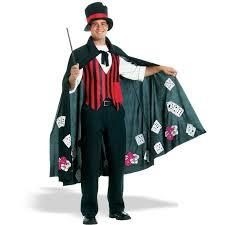 10 Tips for Hiring a Party Entertainer