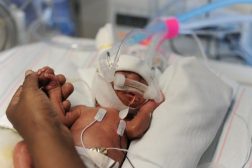 Perched on a stool in the NICU at Beth Israel Deaconess Medical Center in Boston, a new dad stares intently at the diapered infant before him, oblivious to doctors and nurses passing by in the hallway.

His baby sleeps on what is known as a “warming table.” Steel lamps hover overhead, emitting intense blue light and critically needed heat, as this tiny being breathes rapidly, his stomach rising up, down, up down.

Worry lines mar the father’s brow, and let any observer know that right now, right here, the celebration that comes with new life is on hold.

When a baby enters the world prematurely, or in such medical distress that his life is threatened, a hospital’s newborn intensive care unit (NICU) goes into high gear.

The NICU at Beth Israel Deaconess is the second largest in Boston, with about two-dozen patient rooms surrounding a central nurses’ station. Motion and sound detectors trigger a flashing light in front of rooms where babies need immediate attention, alerting the staff to every infant’s cry. There are physicians, nurses, respiratory therapists, a dietician, a pharmacist, and social workers; often, they do rounds together, communicating as a team.

You’ll find about 40 infants here on any given day – about 600 newborns a year with severe breathing trouble, underdeveloped organs and other serious complications. Some stay for a few hours, long enough to confirm that they’re strong and healthy; others might remain for up to six months, sometimes making great gains, other times struggling through setbacks like a collapsed lung, a failing heart.

It is quiet, in spite of all the activity. Perhaps that’s because there’s so much soothing going on. Sitting just off the main hallway, harpist Linda LaSalle plays lullabies. She comes here regularly, convinced that her music plays a vital role.

Social worker Jeanne McCarthy oversees the NICU’s “cuddling program,” in which trained volunteers come in to hold, rock, and even sing to infants when their own parents can’t be there.

McCarthy and social worker Sheleagh Somers do more than comfort infants. They tune in to what a newborn’s family is going through. “Any admission to the NICU, we see as a crisis for a family,” Somers says. “They need tremendous support, the opportunity to process this experience. We deal with all kinds of issues. We have families with insurance questions, parking questions, food questions.”

And then there are the nurses – caregivers that NICU parents probably see more than anyone else. The nurses constantly monitor the infants, providing basic and highly complex care. They teach parents how to interact with, touch and care for their fragile babies. They remain calm and focused when a newborn is in crisis.

Often, they find themselves simply listening to a frightened mom or dad. “Some days are better for these parents than others. Sometimes we’re just there being sympathetic,” says nurse Jennifer Reader, R.N. “We often bond with the parents who’ve been here for a long time.”

While they understand families’ fears about a NICU stay, the nurses must be cautious with reassurance. Life in the NICU is fragile.

“You want to say everything is fine, but you don’t want to give them false hope,” Reader says. Her co-worker, Dorothy Clarke, R.N., agrees. “You can never venture to say it’s fine. I’ve come in to work the next day to find a baby that I thought just needed to transition a bit is now [using a tracheal tube to breathe].”

The hardest days revolve around the death of an infant. NICU parents are acutely emotionally stressed by their infants’ struggles. But when a baby succumbs, the entire staff feels the sadness and despair. “That day is difficult for the nurses and for everybody involved,” says Reader. “You feel it for a couple of days,” Fitzsimmons adds. “The NICU is a family.”

The hospital honors these infants and families with a yearly group memorial service and a framed piece of art – a tree bearing paper leaves with messages: “To our little angel …” “For our darling Julia, who we think of daily and miss so much …”

As worrisome as a NICU stay can be, the infant survival rate is good and success stories are the rule. Overall, says Reader, “these are pretty resilient babies.”

Beth Israel Deaconess celebrates these successes with framed before-and-after photographs of NICU “graduates,” which line the walls of what Fitzsimmons calls the “Hall of Hope.” Beneath the photos are essays written by parents, telling their story, describing their child’s miraculous gains and their immense gratitude for the people who helped that child get there – the caregivers in the NICU. 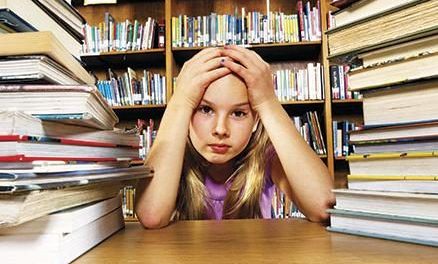 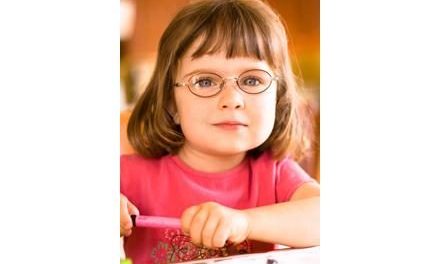 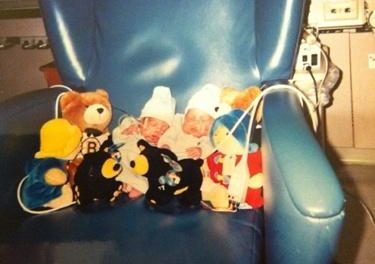