We’re delighted to introduce Math Moments, a fun new element of our magazine. The column’s creator, David Schwartz, spends much of his time finding unusual, whimsical ways to make math and science come alive for kids and teachers, both through writing and through speaking at schools and conferences. He has written nearly 50 books for kids, including How Much Is a Million? and the “Look Once, Look Again” series.

Here, and in coming months, David will be highlighting the simple Math Moments families can discover and explore in everyday life.

As a child, I was filled with awe as I contemplated ordinary things. With their enormous numbers, sizes and distances, the stars amazed me. One day, visiting a museum with my parents, I focused on much closer, much smaller objects, looking through a microscope at hairs from my head and tiny creatures in a drop of pond water. I wondered how many hundreds or thousands of them would be as big as a flea! My mother and father were not scientists or mathematicians, but they encouraged me to ask questions like these, to find math everywhere.

Now, as a math author and educator, I have traveled the world speaking to children, teachers and parents. I’ve noticed that the kids who are successful in math are often those whose parents have helped them find mathematics at home and in family activities. These families know that it only takes a moment to make math meaningful!

Costumes … pumpkins … candy … math! All can be part of Halloween fun. With their hard-earned loot spread on the kitchen table, children see caloric pleasure, but parents can look at the same piles of sweets and see Math Moments.
The brightly wrapped candies can become “manipulatives,” or math props that parents can serve to their children as calorie-free math learning treats.

Children usually need no prompting for the math to begin. The first thing they usually do, after admiring their pillage, is to sort the jumble of candies into those they like and those they could live without. Parents can encourage other kinds of sorting by asking them to group candy by various characteristics. Sorting is an important early math skill that involves seeing similarities and differences, and classifying things according to characteristics – a mode of thinking used in higher-level math.
–At age 3, Chaney Grover can find the square and round candies in his heap and sort them into two piles. By next year-s Halloween, he may be able to add a few more shapes to his sorting vocabulary – rectangles, ovals and cones, perhaps – and a year or two later, he’ll start to sort by multiple characteristics: “Do we have any candy that is round and brown?” his parents might ask. Or, “Can you find something cone-shaped and silver?” Or, even harder, “What is yellow, but not round?”
–The many characteristics of packaged candy can lead to impromptu games. “How are these two candies similar? Different?” Parents can invent a 20 Questions-type game:
Parent: “I’m thinking of a candy. Find out which one.”
Child: “Is it a square?”
Parent: “No.”
Child: “Is it orange?”

And so on. Then switch roles.

Of course, children will probably be more concerned with quantity than qualities, which can lead to counting and computation.

Chaney can count to 10 but, like many 3-year-olds, when he counts objects, he doesn’t always start at one. Using candies, his mom Meliss helps him get the idea. She puts down three candies and Chaney tells her how many. She adds two more and Chaney starts the count over again from one. With practice, he will see short cuts, like “counting on” (starting from the previous total). Later, he will simply add: three candies plus two candies make five candies.

Children do not learn these math basics by memorizing rules. Practice gives them the chance to discover for themselves how numbers work, and discovery means understanding.

When more than one sibling is counting his or her own sweet treasure, comparisons (and boasts) are inevitable: “I have nine Butterfingers, and you have only four!” Don’t let such an opportunity get away without a Math Moment: “So how many more do you have?”

If that’s too easy, try phrasing it another way: “How many more would Sabrina need, to have as many as you?” It may seem obvious that the two questions are equivalent, but children can draw blanks when a simple question is posed in an unfamiliar way.

Daniel Pascal, 5, is very good at adding small sums, and he has decided to view his haul by lining up each kind of candy in a separate column, like a bar graph. He thinks this will make it easier to compare quantities, but he soon sees that a taller column doesn’t necessarily mean more candy. The height of the column depends on the size of the package, not just the number of pieces, so he pairs the candies side-by-side across the columns. Now it’s easy to see that there are more Dove chocolates than Snickers’ bars, even though the line of Snickers bars is taller.

Though Daniel can count to 100, he’s a little shaky on some of the larger number names. His dad Steven sees a chance to give him some practice: “How many candies do you think you have?” Daniel’s guess is 33.

His father takes it one step further: “If you can eat two a day, how long will it take to eat all of these?” To answer the question, the candies can be used as manipulatives, taking two at a time to represent a day’s ration. It’s a challenging problem for a 5-year-old, but Steven Pascal has always challenged his kids with math.

Five years earlier, when Daniel’s older sister Emily was 6, Steven took her to inspect a new wing of their house, then under construction. Referring to the architect’s plans, they used a measuring tape to find the future location of doors and windows. Steven remembers telling Emily that the doorknob would be halfway up the door. He asked her to mark the exact location of the doorknob.

Having been nurtured on a steady diet of real-life math, Emily has excelled in the subject at school. Last summer, she participated in an intensive four-week math and science program for middle school girls.

You can find Halloween Math Moments even before the first treat falls into your child’s sack. Pumpkin-carving gives children a chance to guess (and then measure) their pumpkin’s weight and dimensions. One mother asked her three kids to cut a piece of string just long enough to go around the pumpkin at its widest place. All three kids cut strings that were way too short. (Try it with any spherical or cylindrical object.) This led to a discussion of circumference, the distance around a circle or sphere.

She also had the children guess how many seeds were in their pumpkins, and once the seeds had been scooped out, they refined their guesses. They divided the seeds scooped from each pumpkin into four equal piles, counted the number of seeds in one- fourth of a pumpkin, and used that amount to estimate the total. Then the 10-year-old wondered aloud, “Does a heavier pumpkin always have more seeds than a lighter one?”

They got out the scale and weighed their pumpkins and try to answer the question with data they’d collected. They were not only thinking mathematically, but acting scientifically. And it all began with a few simple Math Moments. 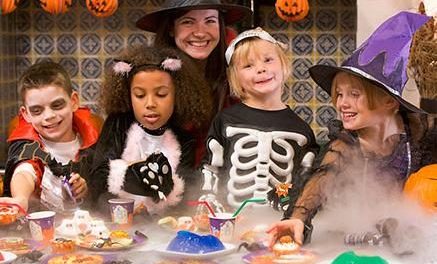 How to Throw a Halloween Party from the Dollar Store

3 Ways to Stop the Whining

5 Questions for the School Photographer

Babies at the Dentist!