9 Reasons Your Teen Should Really Consider College in Europe 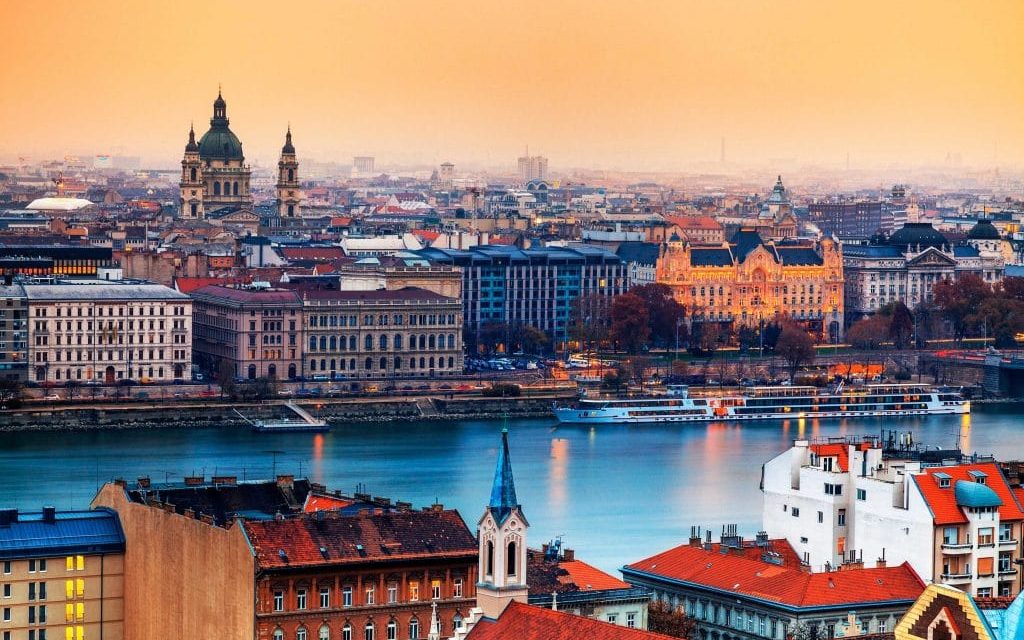 I haven’t always known about going to college in Europe. Before my oldest even started high school, I was worried about the cost of college. Though we regularly put money away for college, our savings would not even scratch the surface of private or out-of-state tuition. I also had concerns about the rat race the college admissions process had become and was worried that my son would not be a good player of that game.

In 2015, I stumbled on the existence of English-taught, full-degree programs held at European universities and decided to explore the possibility. Prior to this, I assumed that going to college in Europe required fluence in a foreign language. I certainly had no idea that in Europe there are over 350 schools offering thousands of bachelor’s degree programs conducted entirely in English–no foreign language skills needed. Everything from the courses to the readings to the assignments are in English.

The savings alone made me realize that many other families would also be interested in learning more. I spent a year researching and visiting schools in Europe, meeting with administrators and talking to American students who were already there. This is how I conceived of Beyond the States. Since then, my own son, Sam, has been happily attending college in Europe, and we have helped thousands of families learn about and navigate these European options themselves.

Of course, college in Europe is not for everyone. You really need to have international interests, and you need to be comfortable making decisions outside of group norms. You need to be comfortable being away from home, and being around people of all different backgrounds and perspectives. Those are the key qualities, and those qualities aren’t necessarily good or bad, but they are needed. If you don’t come in with these qualities then studying abroad may not be a good option for you.

Are you interested in learning why so many families are excited about these little-know options in Europe?

Across Europe, the average cost of all accredited, English-taught bachelor’s degree programs is around $8000 per year, but there is an abundance of programs with a far-lower price tag, and many with $0 tuition, even for international students, in countries like Germany, Norway, Poland, and Iceland.

Even when you factor in the cost of travel to-and-from Europe to the US, and travel around Europe during breaks and holidays, the expense of going to college in Europe can be significantly less when compared to even an affordable US college program.

2. THERE ARE THOUSANDS OF 100% ENGLISH-TAUGHT, ACCREDITED PROGRAMS TO CHOOSE FROM

Choice is another key issue. When cost is a chief consideration, you may be limited to only in-state schools where tuition is lower. In Europe there are thousands of accredited, internationally recognized programs to choose from, and these programs are taught 100% in English, to serve the international community. According to the Beyond the States database there are more than 300 accredited colleges and universities across Europe offering more than 3400 bachelor’s degree programs in English, across all fields of study. So, this is everywhere from Ireland to Estonia, Greece to Portugal to France, to Slovakia and the Czech Republic. 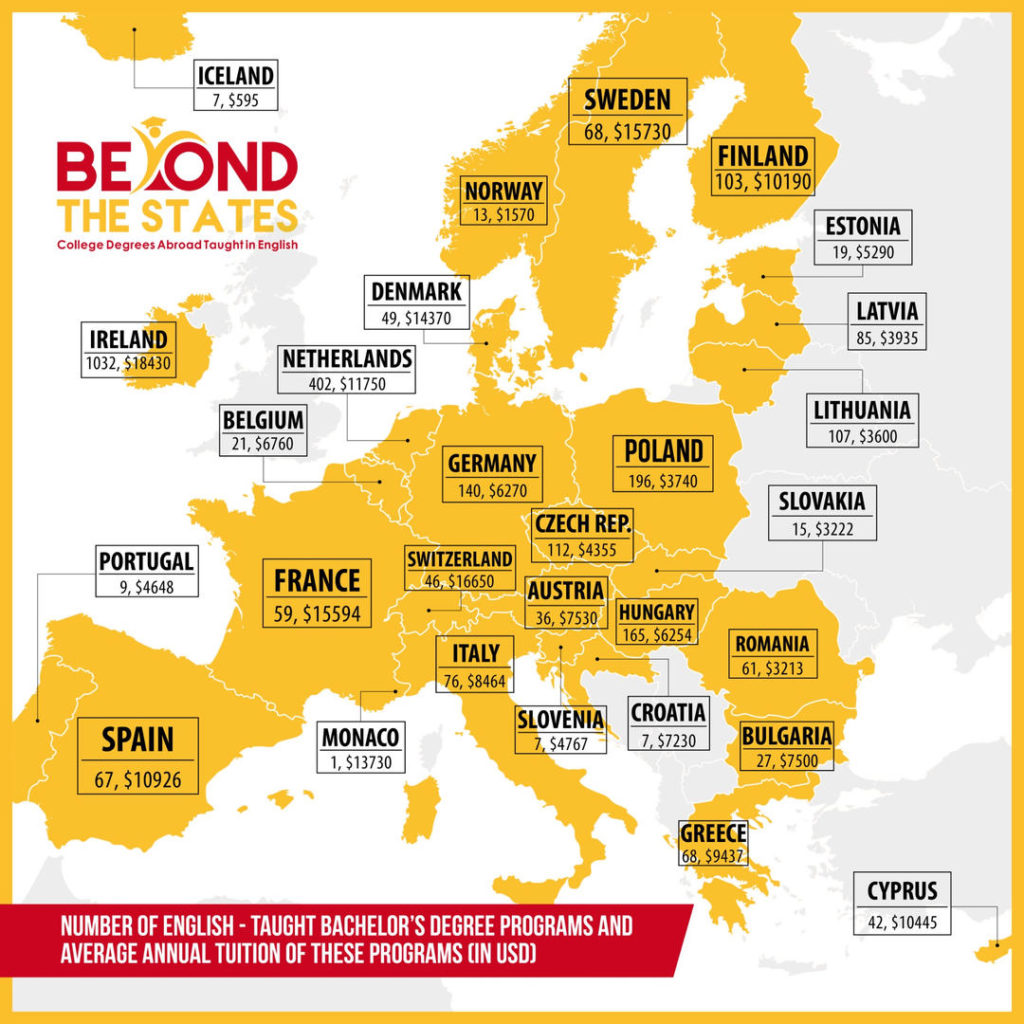 Most American students don’t speak a foreign language proficiently enough to study at a college that teaches in it, but this is a non-issue. Even in non-Anglophone countries in Europe, there are full-degree programs taught in English. These countries are very welcoming and accommodating to international students who want to study there.

3. TO GAIN A COMPETITIVE EDGE IN THE JOB MARKET

Students who studied abroad stand out from the crowd when seeking jobs after college. The very act of leaving their comfort zone to make a fresh start in a new place builds a range of skills (especially “soft” skills) and confidence that will carry throughout a student’s life. Just as important to us, though, is what this experience can do for the overall perspective of the student. They will make friends from around the world, which helps cultivate their identity as a global citizen.

Silicon Valley billionaire investor, Chris Sacca, describes international study experience as a critical differentiating factor among candidates. And according to former General Electric CEO Jack Welch: “The Jack Welch of the future cannot be like me. I spent my entire career in the United States. The next head of [General Electric] will be somebody who spent time in Bombay, in Hong Kong, in Buenos Aires.”

In a study published in the Harvard Business Review, people with experience living abroad were better employees, because they were likely to create new businesses and products and to be promoted. According to The Erasmus Impact Study, internationally mobile students are half as likely to experience long-term unemployment compared with those who have not studied or trained abroad and five years after graduation their unemployment rate is 23% lower.

Professions that require licensure are a different matter; these include many careers related to health care, education, social work, psychology, law, and architecture. Of course, most of these areas also require a master’s degree, so students could study for their undergrad in Europe and then get their master’s degree in the US to avoid these obstacles.

4. TO AVOID THE US ADMISSIONS RAT RACE

Disturbingly, the college admissions process in the US has become a pressure cooker environment where students feel the need to be “the best” in all areas, but the selection process is so arbitrary that the game becomes unwinnable.

The admissions approach in Europe, across the board, is refreshingly transparent and objective. Many countries see entry into universities as a right rather than a privilege, and so admissions standards are not as stringent.

5. YOU MAY BE ELIGIBLE FOR FINANCIAL AID

Even though the affordability factor is a primary benefit of college in Europe, American students may also be able to receive US federal loans to study at an international university. The Department of Education has a list of international schools participating in its student loan program. And some European universities also provide grants and/or scholarships for foreign students.

6. MANY DEGREES IN EUROPE HAVE A SHORTER DURATION

According to the National Student Clearinghouse Research Center, on average, just 58% of US students who started college in the fall of 2012 had earned any degree at all six years later. And according to the nonprofit, Complete College America, every additional year averages $22,826 in tuition costs and expenses.

In contrast to programs in the US, many bachelor’s degree programs in Europe have a 3-3.5 year duration, and this is because there are fewer general education classes required. Finishing a degree faster is a double benefit for students in terms of avoiding more debt, and also earning a living sooner as employed workers.

7. YOU CAN BE AN ACTIVE PARTICIPANT IN THE LEARNING PROCESS

The educational experience in Europe is rich and rigorous, and students are expected to truly engage, and are even encouraged to debate and disagree with the professor. The goal is to help solve problems and enhance critical thinking skills as opposed to regurgitating the material. Further, many universities use modules or block scheduling, so the number of courses you are taking is limited in number with more intensive study over a shorter period of time. This allows students to focus entirely on one class before moving on to the next.

A foreign language isn’t at all necessary to start or even complete a college program in Europe, and English proficiency in most of these countries is quite high. But students have a wonderful opportunity to really learn a language while they’re there. Many colleges in Europe offer free language courses for international students where you can practice through daily interactions in town with native speakers and with other students. 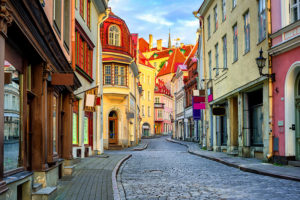 Travel opportunities abound when attending college in Europe, and it is commonplace for international students there. For instance, Lille, a city in northern France with multiple universities, is close to major cities such as Brussels, London, and Paris via high-speed rail. Air travel, especially with the rise of a number of affordable airlines, can even be comparable in price to rail travel, offering ready access to other destinations for short-term travel.

Jenn Viemont is the founder of Beyond the States, the pre-eminent resource for exploring and pursuing college degrees in Europe. 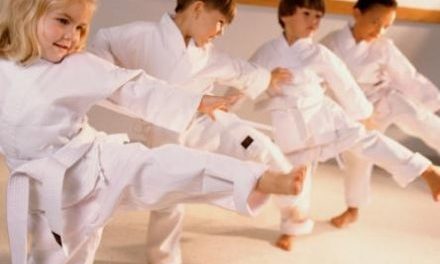 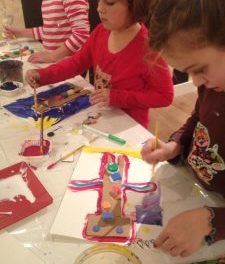 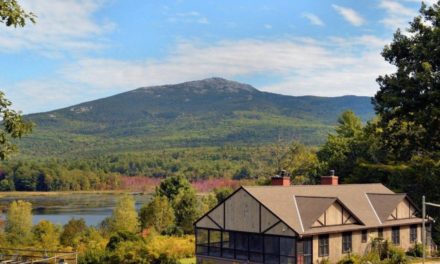