How to End the Blame Game

A few years back, my friend Helen asked me if I would teach a class for parents who are always blowing up at their kids. I suggested she call around to her friends and acquaintances to see if she could drum up enough interest for a class.

She was horrified. “Oh no,” she said. “You don’t understand, none of my friends do this, only me.”

I suggested that she ask them anyway. A few days later she called me back: “I have a group all ready to meet. Everyone I asked about it laughed and said they thought they were the only ones who felt this way, and they couldn’t believe that I did!”

I often think about Helen and her friends when I hear good, committed parents tell me how terrible they are. So I started collecting parents’ self-criticisms. We parents have a lot of them! Sometimes at lectures I will read this list out loud, asking people to raise their hand for each one that applies to them. I frequently have to raise my own hand – and not just to make people feel better.

As the list goes on, everyone is soon laughing, looking around to see who else has their hands up, and nodding in support of one another. I think that laughter is the best response to these types of harsh and hostile attacks on ourselves. Our usual responses – believing them, replaying them constantly in our heads or piling up evidence to “prove” they are true – haven’t made us better parents.

Some common things that parents feel bad about are:

Sometimes the same people identify with opposite self-criticisms, such as “I didn’t breastfeed long enough” and “I breastfed too long,” or “I’m too soft on my kids” and “I’m too hard on my kids.” One of my recent favorites is this one: “I try to reason with my son too much. (Nods of agreement.) And he’s 2 years old (wild laughter).”

I think that once these “terrible secrets” are spoken out loud, and we see that people we admire feel the same way, then the heavy burden lifts and we can see once again that we are truly doing our best as parents. Sure, there’s always room for improvement, butwhen you really have made a mistake, don’t beat yourself up over it. Just apologize, or do whatever you need to do to repair the mistake. Then move on, remembering that anyone who knew the whole story of your life would feel only compassion and admiration for you, not criticism.

Letting go of self-criticism doesn’t mean that the quality of our parenting doesn’t matter. But listening to that same old radio station, the one that keeps playing that same lousy song, doesn’t help us or our children. So change the station! Find one that celebrates your successes and accomplishments, or that treats you with tender sympathy – not harsh put-downs – when you mess up.

Here’s a suggestion for transforming those familiar old self-criticisms into something more constructive in your life:

I predict that after this exercise you won’t just feel better as a parent, you’ll also find yourself becoming the parent you’ve always wanted to be.

See all 10 Talents of Parenting

Lawrence J. Cohen, Ph.D., is a psychologist who specializes in children’s play and play therapy, and is the author of several books, including the award-winning Playful Parenting.

7 Pitfalls of Co-Parenting and How to Overcome Them 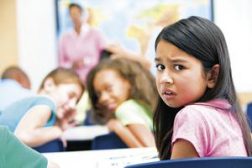 When Kids Exclude Others